Give an Inch, Take a Mile 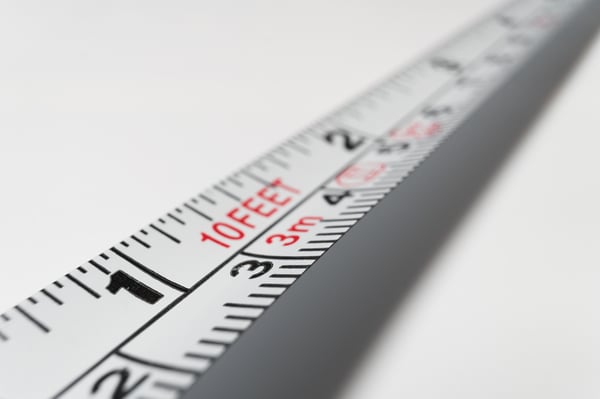 If you look up the definition of measurement, it is described as the act of determining an object’s size, length, weight or capacity. A quick look at a Thesaurus offers up similar words to convey the idea of measurement such as quantify, compute or calculate.

When it comes to measuring and inspecting parts with equipment like a 5-axis LM coordinate measuring machine, data is scanned at speeds of 500 mm/sec and collected at up to 4,000 points per second. Operators deal with tolerances of .0002 inch. To put it in more concrete terms, if you divided a single sheet of paper 40 times that would put you in the realm of .0002.

But the English system of measurement was always so precise or “scientific.” Rather it grew out of the imaginative ways that people came up with to measure for themselves. Familiar objects and body parts were adapted for use as measuring devices. For example, the length of a foot, the width of a finger, and the distance of a step were all accepted forms of measurements.

Here’s how it worked:

Early on, an inch was the width of a man's thumb. In the 14th century, King Edward II of England decided that three grains of barley placed end to end constituted 1 inch equal.

A span was defined as the length of the hand stretched out; approximately 9 inches. The average hand measured approximately 5 inches or 5 fingers across. Today, 4 inches is the determined measurement for a hand which is used to measure the height of a horse from the ground to the equine’s withers [or shoulder].

Ancient history records the foot 111 /42 inches. We know the foot to equal 12 inches which is the length of an average man's foot.

Of course there are other forms of measurement that existed that are less familiar to most of us. For example, in ancient Egypt a cubit was the distance from the elbow to the fingertips. Today the form of measurement still exists but is defined as approximately 18 inches.

Interesting forms of measurement also exist in fundamental skills like cooking. Most of us require recipes with ingredients provided in exact measurements in the form of quarts, cups, tablespoons or teaspoons. But in my grandmother’s time, recipes were not written down and “measurements” constituted a pinch, a dab, a gill [one coffee cupful] or a scruple [about ½ a teaspoonful]. Of course this form of measurement wasn’t exact. In fact, one could say that any given recipe was really just a collection of educated guesses.

In the arena of science however, changes are underway to make several forms of measurement a little less abstract. In 2017 the International Bureau of Weights and Measures (BIPM) announced a plan to review four units of measure, including the kilogram. Recommendations are set to be reviewed by the General Conference on Weights and Measures in November 2018, and could take effect as soon as May 2019.

The review is considering a potential redefinition of the ampere (a unit of electricity), the kelvin (temperature), the mole (measurement of atoms and or molecules) and the kilogram. The four units would be defined by "relationships to fundamental constants, rather than abstract or arbitrary definitions." according to Nature, an international weekly journal of science.

The reason being that while current measurements may be fine for conventional use, they don’t make the grade when it comes to scientific testing. While the changes won’t affect day-to-day activities, they will “allow scientific measurements to catch up to the latest levels of universal certainty, which track the physical quantities that are universal in nature.”