Weighing In On Offline Programming

Philippe Cochet, GE’s chief productivity officer, wrote in a recent GE Report that “advanced manufacturing industries account for 24 million jobs - 13 percent of all American jobs - and each of those jobs supports another 3.5 jobs throughout the supply chain.” He continues,

The integration of hardware and software is changing the way products are conceived, produced and installed…we can now embed sensors onto our machines, leverage software to gather data and use those insights and analytics to ultimately drive greater productivity.

CMMs are a key component in the push for higher throughput. Their ability to precisely measure parts and part features gives manufactures a critical tool for verifying tolerances. Additionally, the data derived from a CMM can be used for design, testing, assessment, profiling and reverse engineering.

So where does offline programming come in? It can optimize the use of a CMM and further boost efficiency. Simply put, manufacturers that write programs on a CMM are not using the machine for the reason it was purchased – to measure parts.  Offline programming frees up time on the CMM that can be used to push parts through quality checks.

Typically, programming online means you are creating a program to check a variation in a machined part. Nominals of features can be skewed.  Geometric dimensioning and tolerancing provides positional reporting of feature nominals to calculate position. That means feature nominals and vectors have to be correct.  CAD models used offline can eliminate the need to correct nominals as you create features - if your part model is accurate. And there are other advantages.


Offline programming also permits easier handling of freeform and prismatic parts by allowing a manufacturer and programmer to support the parts' individual requirements. Freeform parts (sculptured, contoured or organic in shape) such as airfoils, ship propellers and car bodies must be modeled, identified, aligned, compared to other objects, modified and fabricated - and then measured. Since there are no recognizable feature points with freeform parts, software and the subsequent programs written must support scanning solutions like 3D which is required to measure organic surfaces.

Prismatic parts also benefit from offline programming. A programmer can determine data points based on parameters such as tolerance, part geometry or squareness. Once two planes are formed in a bore at different depths, a programmer can take data points around these diameters and form a cylinder. The data points are then measured to verify squareness. Once offline programming is completed, an AIMS CMM equipped with a Renishaw PH20 or PH10 probe head can perform 5-axis scanning for fast, accurate measurement.

Having the right CMM and the right software is critical but offline programming is also crucial to a company’s competitive edge.

MODUS software provides the capability to develop and run inspection programs and fully supports REVO PH20 5-axis measurement technology. The metrology software is built on industry standards and is CAD compatible and configurable. MODUS also has the capability to format results data so that any SPC software can read it with the proper format protocol.

So - be sure to ask for CAD models to support offline programming, but also look at the other components of the solution – your CMM and the software you're using to run it. 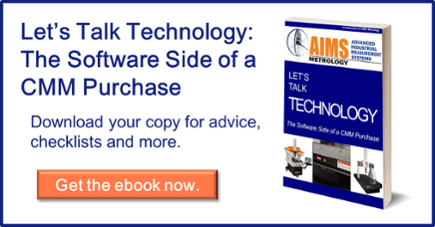